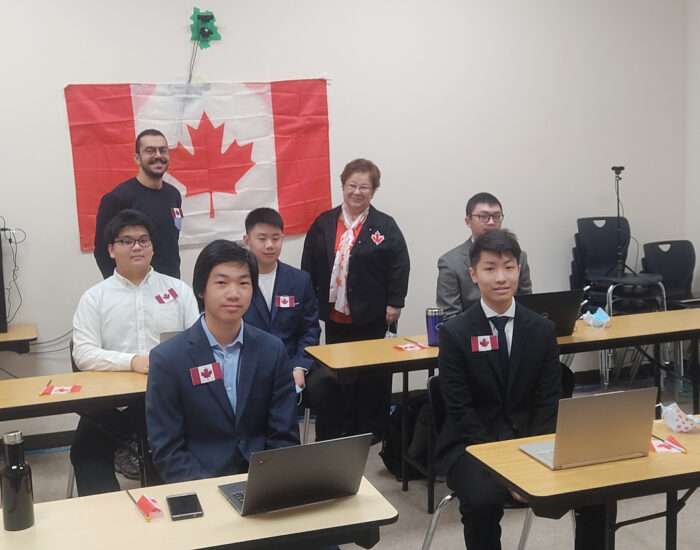 The 14th International Olympiad in Astronomy and Astrophysics was held as a hybrid event from November 14 to 21, 2021. Colombia was the host country of the 14th IOAA.

The organizing and academic committees were concentrated in one place for the duration of the Olympiad. A production team supported the committees to ensure that all online communications run as smoothly as possible. Staff was available 24 hours a day for any inconveniences that may surface.

All teams were gathered in one place within their country during examinations. Each country had two supervisors available during the exams for a fair and honest competition. Video cameras were installed throughout the classrooms to allow remote surveillance from Bogotá.

The Olympiads School in Toronto helped with organizing and equipping the classroom for the rounds with all the necessary equipment. The participation of the Canadian team was taken care of without a single failure and comments from the organizing committee.

The Canadian team consisted of the winners of the International Physics and Astrophysics Olympiad, the Canadian Astronomical Olympiad contest, as follows:

Despite difficult scheduling such as the start of the Olympiad at 5 a.m. EST, our participants brilliantly coped with the problems in the theoretical, practical, observational rounds and team competition!

Team Canada has again won First place in the Team competition, and a gold (Daniel Yang) and three bronze medals (Simon Wu, Joey Zou, and Victor Gao) in the individual competition! We are extremely proud of their achievements! In 2014, in Romania at the 8th IOAA, we already had the best result in the team competition and now we have repeated this achievement again. No team in the history of the IOAA has managed to be first twice in a team competition. We are the only ones!